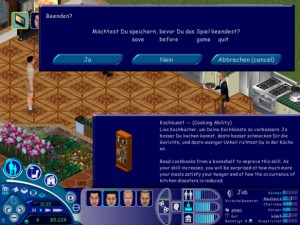 The author provides a case from her own experience of language learning. With the memorization of vocabulary irrelevant to everyday life and dullness of completing practice exercises in her high school, the author failed her German class. However, she was later encouraged in learning German again by using music sites but mainly, a video game called ” The Sims”, which helped her progress a lot in L2 learning. By playing video games in German rather than in English, the author was able to relate German words to her L1 in the gaming environment. Meanwhile, when the player makes some wrong comprehension about certain words and executes the orders incorrectly, the character would act weird in the game to make the player realize his/her mistakes.

Similar practices can be extended to music video. Studies show that previous attempts to engage music in classroom can be challenging because of students’ different tastes in music and because music lyrics can be difficult.  Therefore, Purushotma suggests a new method for teachers: through 3D spatialized sound technology, teachers can delay the time of the sound delivered to each ear while inserting instructional content, for example, the translation of the unfamiliar words in the lyrics.  Purushotma also introduces the Pimsieur series which focuses exclusively on the use of auditory material.  Through this kind of language learning system, students can load the materials on their cellphone and they don’t need to take a book with them.  In occasions when time or attention is less valued, such as walking to school or waiting for the bus, the Pimsleur series can be used effectively.

It’s fair to say that educators could make some modifications to the daily digital practices so that students can learn in the entertainment context without wasting their free time. Modifying media in the way that Purushotma suggests seems to us to have both affordances and constraints:

In conclusion, language instruction embracing popular media forms could be implemented in various contexts even without arousing people’s awareness of studying.