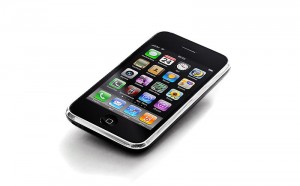 As mobile phones and gadgets become more affordable, it is no surprise that young people love mobile technology more than ever and use it regularly. Teachers and teachers-to-be, have you thought of employing mobile devices to cater to diversified learning needs?

George Chinnery (2006) did a study on mobile language learning and found that some technical problems arose due to limitations inherent in the devices such as low-resolution screens for image / video display. The limited features and expandability offered by the predominant operating systems (OS) for phones and PDA’s at that time was also one of the reasons for slow development of mobile language learning.

Until 2007, a revolutionary device, iPhone by Apple Inc, was born and amazed the world. It changed our habits of texting and browsing the web. Mobile screens were enlarged with better screen resolution, improved audio quality and more powerful processors allowing the playing of high quality video smoothly.  The touch screen feature of smartphones and hardware enhancement has not only made web navigation and texting easier, it has also facilitated the use of mobile phones in the educational sector.

Some Apps on the Rise

A screenshot of eStroke on the phone. Photo taken by Chris Merck.

Various apps have been designed for language learning for both iPhone and Android systems. Many of these apps are quite similar and available now on the phone, including flashcard programs, dual language dictionaries, and phrase books. For instance, the famous travel guide Lonely Planet app is a good example of phrase books. It has advanced features such as drag-and-drop trip planners, audio phrasebooks, and even augmented reality, which uses the phone camera views to overlay local site information. In terms of dual language dictionaries, one popular app for learning Chinese is called eStroke. Its main goal is to help learners to write Chinese characters in stroke order, but it also entails an extra dual-language dictionary, features excellent animations, and includes a personal library and quizzing functions. (Godwin-Jones, 2011)

When creating an app for mobile learning, developers have to consider different OS capabilities and select a suitable approach that matches the devices’ programming environment. Here are five approaches:

Smartphones adopt different programming environments which are not compatible with each other, e.g. iOS apps for iPhone and Andriod apps for Samsung. Therefore, different versions of the same app have to be developed to make the app available on different smartphones for teaching. Native apps thereby require more resources than other approaches like web app, so it may be too costly for language learning purposes.

Web apps only need a text editor for scripting which requires less effort in development. A slow executing speed, less smooth user interface and limited access to the hardware of the smartphones may affect its reliability. However, smartphone environments do not affect web apps’ operation and performance. Learners can open the app from both desktop browsers and mobile devices. Therefore, this approach may be more feasible.

Hybrid apps require a tool to connect a web app to the smartphones’ native environment. Examples of this tool are PhoneGap, Appcelerator Titanium and jQuery Mobile. This kind of tool facilitates the creation of parts of web apps like navigation.  JavaScript writing is not needed and most smartphones can use this app.

CSS (Cascading Style Sheets) media queries enable the web-based content to re-format and display itself on the small screen. We can just insert a tag to HTML header which directs a web browser to select a font size that suits CSS style. Both mobile and desktop browsers support this function.  Although the code is simpler, it requires extra effort in creating separate HTML pages for smartphones.

Flash is supported in most mobile devices except the most popular iOS devices.  The performance of flash on mobile devices is not as good as that on desktop platforms as the memory of smartphones is inadequate, leading to crashes in the systems and slow operation.  Thus, Flash is not the best tool for app development.

Outlook: tablets also on the rise 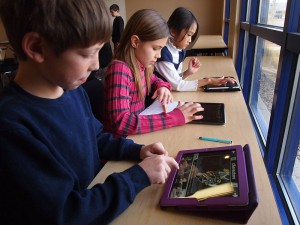 Touchscreen tablets, such as iPads have become very popular for language learning probably because the touchscreen interface creates a more personal and intimate connection between the users and machines (Forrester Research,2011). The screen size and touch interface also allow users to focus on one task and teachers can use tablets to capture learners’ attention.

(a) Most parts of the mobile assisted language learning were boring and repetitive, and did not draw on “the advantage of mobility, peer connectivity or advanced communication.”

(b) Activities were “teacher-led and scheduled“. Students could not learn autonomously  at any time or any place.

Developers should change their concepts of language teaching and be innovative in designing new apps, instead of doing the same old things in a new way.

David Read, a mobile ESL blogger, describes a ‘photo translation function’ which he wants to see in a language app. People can use the built-in camera to scan and translate texts like menus and posters. They can also get access to language corpora in small screens and look up words in different online dictionaries at the same time. All these resources can be added up in a personal word bank, just like an intelligent tutoring system (ITS).

Godwin-Jones(2011) suggested that smartphones and tablets are ideal tools for “individualized informal learning”, as students can select the apps they want and decide how to use them. As language teachers, we should encourage and assist learners’ autonomy by incorporating the use of smartphones and tablets in the classroom. In this way, we can combine formal and informal learning.

Godwin-Jones (2011) concluded that mobile devices are great ways to help learners link their learning with their daily lives outside the classroom. As a language learner or teacher, do you agree with that? No matter what you think, no one can ignore the fact that mobile devices are “powerful and versatile” tools that may become the sole computing devices in the future.