Can you imagine learning a second language through digital games?

As reported in 2016, there are in total 1.8 billion gamers in the world, with those who are under 18 taking up 26% of the total.  And with the development of the Internet as well as the growth in the economy, more and more people can get easy access to the Internet, which means that the number of the adolescent gamers is likely still on the rise. Therefore, this phenomenon has raised a lot of public’s concern, especially from those parents who are worried that playing games may affect teenagers’ study and temperament (becoming violent, unwilling to attend school, etc.). Besides anxious parents, many teachers also prohibit students from playing games, being afraid that students will indulge in the game.  But have you ever realized that playing games can actually do good to one’s language study? 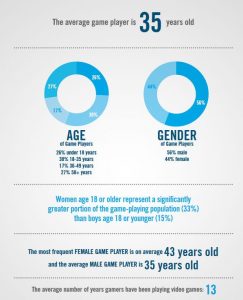 they clearly make learners feel less anxious and encourage collaboration and group cohesiveness. Secondly, in contexts where English is taught as a foreign language, and where students have limited access to opportunities for target language production, games can possibly play an important role in that they provide students with opportunities to apply what they have learned in class to the real world (although in the form of virtual world online). Thirdly, games make learners feel they are achieving better in the way that learners will get continuous and immediate feedback from the NPCs and they can complete the tasks through language.

Figure 2. A screenshot of Quest1: Finding out how David uses his new computer.

However, as we can imagine, there are still some limitations of conducting digital games  on language learning. First of all, people differ a lot in many aspects. Students who do not like  playing games, or are not familiar with computer games’ settings may not hold very positive attitudes towards this kind of study. This could in turn influence the outcomes students get and the levels they finally achieve.

Secondly, playing games and accomplishing tasks give students an immediate sense of achievement, this may somehow affect the responses they give. While playing games, students encounter different quests and tasks. With the information they get from interaction and the increased difficulty, when they complete the actions, the students will have higher self-perceived competence of communication. The excitement influences how they perceive their language competence.

Thirdly, games which are used for educational purposes need to be modified. Some original online games are filled with violence, or contain too many advanced vocabulary items. These games are inapposite for second language acquisition. The teachers need to modify the games and create a suitable language learning environment which is appropriate for the students’ level of proficiency, and make sure the students do not weigh playing games over language learning.

Last but not least, whether game-based learning is beneficial for the outcome of second language acquisition is still indeterminate. Although game play encourages students’ willingness to communicate in the target language which is a main factor for language learning , there is still no evidence for the effects on improving one’s fluency and accuracy in the target language.

In general, digital-game based learning is still a new field for language learning. Further studies need to be done if we want to gain deeper understanding of applying this to language teaching.

So, here are some questions for you:

49 thoughts on “Can you imagine learning a second language through digital games?”