A few years ago, the most exciting thing we could do with our mobile phones was to download a ringtone. However, the development of new technology has made a vast array of apps (applications) is made readily available for iPhone or Android phone users. This phenomenon has led to tremendous interest in Mobile learning (m-learning) among educators. In view of this, more language learners are invited to leverage the enhanced capabilities of multiple mobile devices as a complement to their learning process.

Such a huge step in functionality arrived with the Apple iPhone in 2007. The iPhone’s own advanced features have not only fundamentally changed the game in the mobile area, but also led competitors to create other equally capable devices. 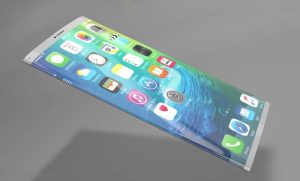 Apps On the Rise

The release of Mobile Safari of the iPhone in 2007 is one of the significant software enhancements. Combined with the hardware enhancements: a larger, high-resolution screen, a more powerful processor, more internal (RAM) memory, and faster Internet connectivity, Mobile Safari was able for the first time on a device its size to access and display the “full” Web. Given the above enhancement, Apple initially encouraged developers to create Web apps. It was not until 2008 thatApple allowed third party native applications for the iPhone. Since then, the quantity of apps in the App Store is has burgeoned. Similarly, Google Android Operating System has also been booming in terms of the  quantities of its users and apps.

1. Vocabulary development programs have become more sophisticated and powerful, integrating the different functions into one app. For instance, e-Stroke for Chinese stroke learning includes animations of the sequence to write a character, flashcard system, and dual language dictionaries (see Figure 2). 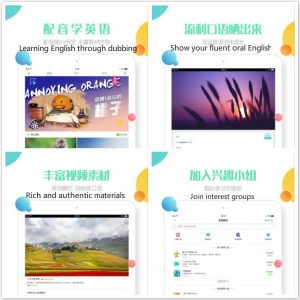 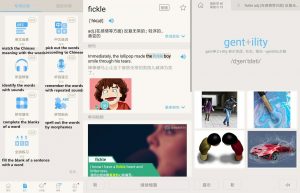 3. In the Baicizhan App (see Figure 4), there are various ways for learners to memorize the words, such as listening to a lyric which contains the “target word” from a song, watching a video which explains the pragmatic and grammatical knowledge of the “target word”, reading the word-building rules to learn prefixes and suffixes, etc. Besides, there are different types of practices for learners to choose.

Not only the mobility, enhanced hardware, but also better software of new mobile devices can foster new ways of learning. Actually, all of them encourage a new kind of relationship between users and electronic devices. According to Godwin-Jones (2011),

“As personal devices, smartphones are ideal for individualized informal learning. The user determines which apps to acquire and how to use them. As language educators, we should encourage and assist the learner autonomy this enables and provide means for learners to combine formal and informal learning. It is known that learning becomes more real and permanent when tied to learners’ lives outside the academic environment. Mobile devices are a great way to achieve that goal. As mobile devices become even more powerful and versatile, we are likely to see more users make them their primary, perhaps their sole computing devices. This is not a trend that language educators can ignore.”

To catch up with the trend of learning via mobile devices, therefore, it is necessary for teachers in school to think about how to encompass the informal learning on apps into the cooperation with formal learning in school.

Here are the questions for you:

(Edited by Eva, Evelyn and Laurel)