Play for Fun, Play to Learn 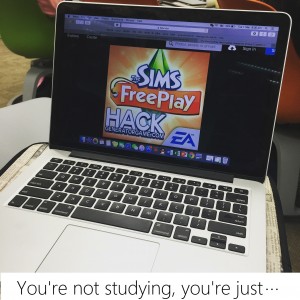 In Purushotma’s (2005) article, she argues that “edutainment”, which seeks to realize educational goals within entertainment settings, plays a significant role in students’ language learning. She emphasizes how games, Web browsing, Typing tutors, and pop music can be utilized in language learning. Let’s see more details in these examples .

GAMES – THE SIMS
Purushotma were recommended to use the Sims, a game simulating normal daily life, for her German learning. The Sims is a typical example of being able to integrate entertainment with education. Players are required to manage a virtual family through different tasks. During the control of the game in German version, Purushotma found that some vocabularies in the tasks match the words of her German homework so that she easily linked the new German vocabulary in class to relevant contexts in the game. More effectively, in this video game, when players fail to comprehend the German commands and make the wrong executions, the virtual character will act in a strange way which makes players realize their mistakes. In addition, Purushotma describes how the game can be ‘modded’ (i.e. changed) so that language learners can be given vocabulary hints as they play it.

WEBSITE BROWSING
L2 learners can accumulate words and phrases via browsing the Internet. By reconfiguring the layout and design of the browser interface in the target language, learners are exposed to L2 words and expressions when waiting for the website loading, thus learning new words and expressions without deliberately memorizing them. In addition, presenting study contents in the periphery of a student’s browser interface encourages continued rehearsal, which keeps learned items accessible in the long term (Bjork & Bjork, 1992; Forester, 2002).

TYPING CLASS
According to Williams and Thorne (2000), following the instruction of a typing tutor, students learn a target language by typing customized sentences synchronized with the current course material, bi-lingual games or pop-music lyrics.

MUSIC
Purushotma also strongly argues that music is an important “edutainment” for language learning and teaching. Despite the various music tastes in a class, many resources like MTV international, net radios, and audioscrobbler, which can present synchronized lyrics (both original and translated versions) retrieved from online databases, allow teachers and students to choose their preferred music to facilitate language learning.

CONS: Game addiction, unpredicted outcome (i.e. many people are attempting to learn English by using English songs but the outcome of learning is not so obvious) and low efficiency in leaning, particularly for teenage learners without self-discipline, are likely to be potential problems, which are worth considering when adopting these methods.

Image credit by our group members

44 thoughts on “Play for Fun, Play to Learn”